Mince Pie is a fruit-based mincemeat sweet pie of British origin that is traditionally served during the Christmas season in the English-speaking world. Its ingredients are traceable to the 13th century, when returning European crusaders brought with them Middle Eastern recipes containing meats, fruits and spices.

The early mince pie was known by several names, including mutton pie, shrid pie and Christmas pie. Typically its ingredients were a mixture of minced meat, suet, a range of fruits, and spices such as cinnamon, cloves and nutmeg. Served around Christmas, the savoury Christmas pie (as it became known) was associated with supposed Catholic "idolatry" and during the English Civil War was frowned on by the Puritan authorities. Nevertheless, the tradition of eating Christmas pie in December continued through to the Victorian era, although by then its recipe had become sweeter and its size reduced markedly from the large oblong shape once observed. Today the mince pie remains a popular seasonal treat enjoyed by many across the United Kingdom. 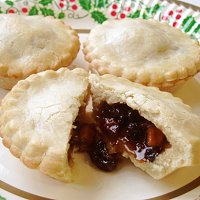 (Note: Many high quality brands available.
However should you want to make your
own Mincement - here is the recipe.)

Make the pastry by sifting the flour and salt into a large mixing bowl. Rub the lard and butter into the flour to a crumb consistency. Add a little water and mix to a dough that leaves the bowl clean. Place the pastry into a food bag and leave in the fridge for 30 minutes.

Roll out the pastry as thinly as possible and use a 7.5cm pastry cutter to form 24 rounds. Gather up the off cuts and roll them out again. Use a 6cm cutter to form the 24 lids.

Grease 24 small pie tins (Yorkshire pudding tins will do) and line with the larger rounds of pastry. Fill each pie almost to the top leaving the edge of the pastry exposed. Moisten the edges of the pastry with water and do the same with the pastry lids. Lay the lids over the pies and gently press together.

Brush the tops of the pies with milk and make small hole in each one with a sharp knife. ake on a high shelf in the oven for 25 - 30 minutes until golden brown. Dust with icing sugar.

Mince or process the raisins, peel, apples, half the sultanas and half the currants until very finely chopped. Tip into a large bowl and combine with the remainder of the fruit, the suet, sugar, rind, juice, spice, nutmeg and liquid, mix well and leave in a covered bowl for a week, stirring every day. Store in clean well sealed jars until ready to use.

Listed in the Sweet Sauce section of the website.